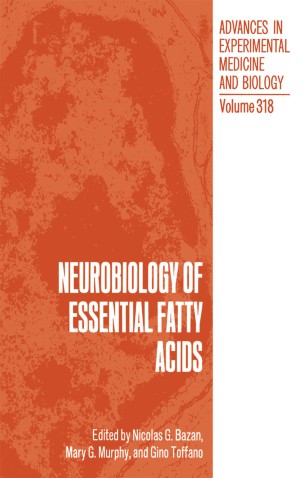 Part of the Advances in Experimental Medicine and Biology book series (AEMB, volume 318)

It is increasingly evident that polyunsaturated fatty acids (PUFA), which in the past were often believed to be mere components of cellular membranes of neural tissue, are actually major determinants of the functional properties of neural cells and are intimately involved in brain disease processes. The two families of PUF A, which are derived from the essential polyenes, linoleic (18:26) and a-linolenic (18:33) acids, constitute a major proportion (-30%) of the total fatty acids esterified to brain phospholipids. Each family is distributed in membranes in a highly specific manner with respect to brain region, cell type, and position within each of the phosphoglycerides. Unlike their behavior in other organs, the PUF A components of brain turn over slowly and are relatively resistant to dietary modification. Their unique distribution and stability suggest that they play an important role in determining the functional properties of neural cells. However, until recently very little was known regarding the precise nature of their involvement.