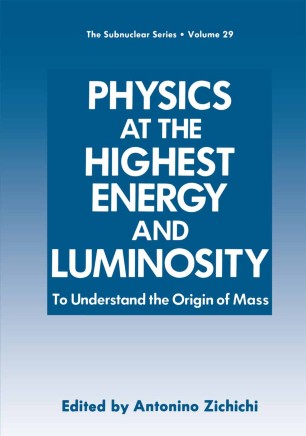 Physics at the Highest Energy and Luminosity

To Understand the Origin of Mass

Part of the The Subnuclear Series book series (SUS, volume 29)

During July 1991. a group of 99 physicists from 57 laboratories in 27 countries met in Erice for the 29th Course of the International School of Subnuclear Physics. The countries represented were: Algeria. Argentina. Austria. Brazil. Canada. China. France. Germany. Greece. India. Ireland. Israel. Italy. New Zealand. Norway. Pakistan. Poland. Portugal. Rumania. Spain. Sweden. Switzerland. Thailand. Turkey. The Union of Soviet Socialist Republics. the United Kingdom. and the United States of America. The School was sponsored by the European Physical Society (EPS). the Italian Ministry of Education (MPI). the Italian Ministry of University and Scientific Research. the Sicilian Regional Government (ERS). and the Weizmann Institute of Science. The opening lecture of the School was given by Professor Lev Okun. A few remarks are in order. In the pre-Gorbachev era. Professor Okun's case was the most difficult: in spite of many invitations he was not allowed to come and lecture at Erice. Nowadays the hard times have nearly been forgotten. It is with pleasure that I recall here a discussion I had with my friend Lev Okun in my house during one of his rare visits to CERN. The after-dinner topic was Galileo Galilei and his great discovery; i. e . • the equality between gravitational and inertial masses - a discovery that we are celebrating now. four hundred years later. Here is a synthesis of Professor Okun's position: given a massive particle. the only quantity we should consider when talking about masses.