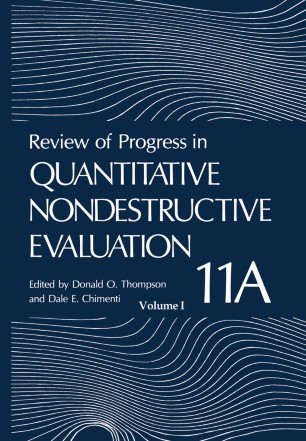 Part of the Advances in Cryogenic Engineering book series (volume 28)

In the current volume, consisting of Parts A and B, edited vers ions of most of the papers presented at the annual Review of Progress in Quantitative Nondestructive Evaluation held at Bowdoin College, Brunswick, Maine on July 28-August 2, 1991 have been collected. The Review was organized by the Center for NDE at Iowa State University and the Ames Laboratory of the USDOE in cooperation with a number of organizations including the Air Force Materials Directorate, Wright Laboratory, Wright Patterson Air Force Base, the American Society for Nondestructive Testing, the Center for NDE at Johns Hopkins University, Department of Energy, Federal Aviation Administration, National Institute of Standards and Technology, National Science Foundation IndustryjUniversity Cooperative Research Centers, and the Office of Naval Research. The 1991 Review of Progress in QNDE was attended by approximately 450 participants from the US and many foreign countries who presented over 360 papers. Divided into 36 sessions, with as many as four sessions running concurrently, the meeting covered all phases of NDE development from basic research to engineering applications and all methods of inspection science from acoustics to x-rays. Over the past ten years, the participants of the Review have seen it grow into one of the largest and most significant gatherings of NDE researchers and engineers anywhere in the world. By sharing their work at this conference, they deserve much credit for its success.