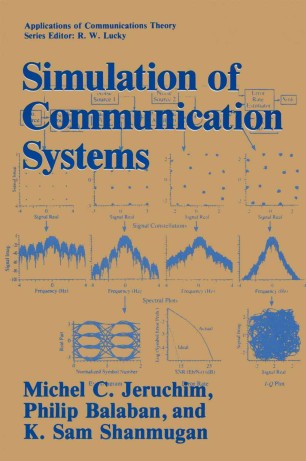 Part of the Applications of Communications Theory book series (ACTH)

Simulation may be defined as the discipline whose objective is to imitate one or more aspects of reality in a way that is as close to that reality as possible; indeed, an apt synonym that is gaining some currency is artificial reality. Under this definition, simulation is a very old discipline. Probably the first applications of simulation were to scale models of various types of dynamical structures or mechanical devices. Man has always looked for ways to "try things out" before building the real thing; this is the motivation behind any form of simulation. Thus, simulation of communication systems is concerned with imitating some aspects of the behavior of communication systems. It is implicit in our use of simulation that the medium (so to speak) for carrying it out is the digital computer. Computer-based modeling and simulation of communication systems has only developed in the last 20 years or so, since the advent of modern digital computers. A variety of modeling and simulation techniques have been developed and described in widely scattered journals, but until now there has not been a single volume devoted to the subject. We have tried to provide a unified framework that describes both the disciplines involved and the methods of modeling and simulating communication systems and subsystems. In the electronic era, the first type of computer simulation, in today's use of the term, took shape in the form of analog computers.