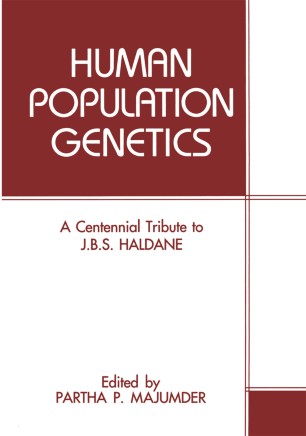 A Centennial Tribute to J. B. S. Haldane

J. B. S. Haldane, R. A. Fisher and Sewall Wright simultaneously, and largely independently, laid the foundations of population genetics and the mathematical theory of evolution. Hal­ dane was born on November 5, 1892. Although he primarily worked at the University College London (UCL), in 1957 he resigned from the UCL and joined the Indian Statistical Institute, Calcutta (India) as a Research Professor. In celebration of his birth centenary, the Indian Statistical Institute organized an International Conference on Human Genetics from 15 to 19 December, 1992. The prime motive in holding this Conference was to bring together a group of scientists - geneticists, anthropologists, clinicians and statisticians - to evaluate the impact of Haldane's contributions to various areas of human genetics, and also to review recent developments in the subject. Session and lecture themes were so chosen that they covered areas theoretical and applied, classical and emerging. Speakers were then identified and invited to deliver lectures on these themes. Manuscripts of all invited presentations and a selected number of contributed presentations were considered for inclusion in this Proceed­ ings Volume. Each manuscript was reviewed by at least one Conference participant, which resulted in revision of several manuscripts and rejection of some. This volume is a collection of the manuscripts which have been 'accepted' after the review-process. The Conference began with the "J. B. S. Haldane Centenary Lecture" delivered by C. R. Rao.