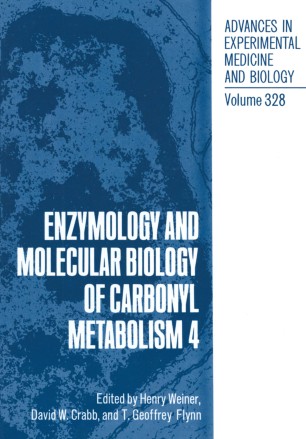 Part of the Advances in Experimental Medicine and Biology book series (AEMB, volume 328)

The Sixth International Workshop on the Enzymology and Molecular Biology of Carbonyl Metabolism was held outside of Dublin, Ireland at the end of June, 1992. Prof. Keith Tipton, Chairman of the Biochemistry Department at Trinity College, kindly agreed to host the meeting. On behalf of all of us who attended I wish to extend our sincere thanks to the whole Tipton family for making us feel so welcome in Ireland. It has been a decade since the frrst workshop was held in Bern, Switzerland. The scope of the meetings reflected somewhat the changes that have occurred in biochemistry during the past decade. At the first meeting primarily enzymes and their properties were discussed. At this last meeting many of the talks centered on gene regulation as well as more traditional aspects of enzymology and metabolism. During the past decade site directed mutagenesis to probe for the active site of an enzyme has become part of traditional enzymology; this was virtually unheard of at our frrst meeting. Many of the presenters now used this tool to study some aspect of structure and function of one of the three carbonyl metabolizing enzymes.