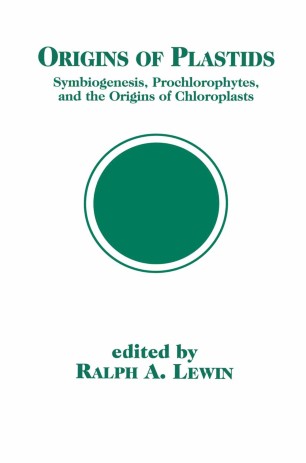 Symbiogenesis, Prochlorophytes and the Origins of Chloroplasts

Origins of Plastids looks at symbiosis and symbiogenesis as a mechanism of evolution. This theory of endosymbiotic evolution postulates that photosynthetic prokaryotes living as endosymbionts within eukaryotic cells gradually evolved into the organelle structures called chloroplasts. The theory is controversial but has been strongly advocated by Lynn Margulis. Based on a colloquium held at the Bodega Bay Marine Laboratory of the University of California at Davis, Origins of Plastids reviews recent data on this most basic problem in plant evolution. In it, leading researchers in the field apply the theory of endosymbiotic evolution to plastid origins, producing an important new reference work for both professionals and graduates interested in the origins of life, the origins of the eukaryotic cell and its organelles, and the evolution of the higher plants in general. Origins of Plastids represents the state-of-the-art in its field. It should find a place on the bookshelves of people interested in microbiology, plant science, phycology, cell biology, and evolution.