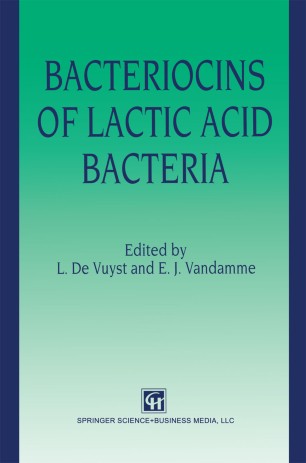 As antibacterial compounds, bacteriocins have always lived in the shadow of those medically important, efficient and often broad-spectrum low-molecular­ mass antimicrobials, well known even to laypeople as antibiotics. This is despite the fact that bacteriocins were discovered as early as 1928, a year before the penicillin saga started. Bacteriocins are antimicrobial proteins or oligopeptides, displaying a much narrower activity spectrum than antibiotics; they are mainly active against bacterial strains taxonomically closely related to the producer strain, which is usually immune to its own bacteriocin. They form a heterogenous group with regard to the taxonomy of the producing bacterial strains, mode of action, inhibitory spectrum and protein structure and composition. Best known are the colicins and microcins produced by Enterobacteriaceae. Many other Gram-negative as well as Gram-positive bacteria have now been found to produce bacteriocins. In the last decade renewed interest has focused on the bacteriocins from lactic acid bacteria, which are industrially and agriculturally very important. Some of these compounds are even active against food spoilage bacteria and endospore formers and also against certain clinically important (food-borne) pathogens. Recently, bacteriocins from lactic acid bacteria have been studied intensively from every possible scientific angle: microbiology, biochemistry, molecular biology and food technology. Intelligent screening is going on to find novel compounds with unexpected properties, just as has happened (and is still happening) with the antibiotics. Knowledge, especially about bacteriocins from lactic acid bacteria, is accumulating very rapidly.