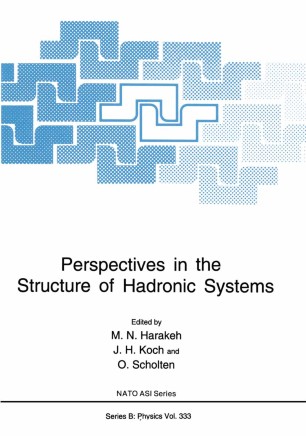 Perspectives in the Structure of Hadronic Systems

The last decade has been witness to many exciting and rapid developments in the fields of Nuclear Physics and Intermediate Energy Physics, the interface between Nuclear and Elementary Particle Physics. These developments involved to a large extent the sub nucleonic degrees of freedom in nuclei. In deep inelastic lepton scattering from nuclei, for example, it was observed that the quark structure of the nucleon is influenced by the nuclear medium. Also, the spin-dependent structure function of the nucleon was found to differ from sum rules based on SU(3) symmetry, a discrepancy referred to as the "spin crisis". In pion electroproduction at threshold and in the production of pions and other mesons in heavy ion collisions at intermediate energies interesting experimental results have been obtained, which triggered lively theoretical discussions. Furthermore, the search for the quark-gluon plasma phase of hadronic matter, a phase that is supposed to have existed in the first few seconds of the Big Bang, has been intensified. Not only were these developments accompanied by technical developments, such as the building of new experimental facilities, but also extensive theoretical efforts have been directed towards understanding these phenomena. These concerted efforts will hopefully lead to an understanding of the transition from the non-perturbative QCD regime to the perturbative one, in which the quark structure of nucleons is better understood. All of the aforementioned developments occur at a high pace, making it difficult to incorporate them into the courses offered to advanced students.