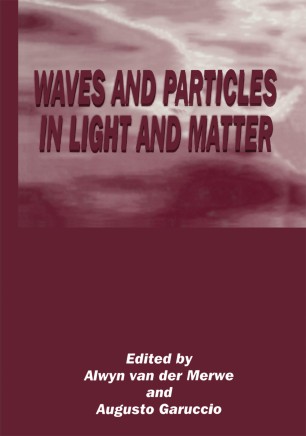 Waves and Particles in Light and Matter

From September 24 through 30, 1992 the Workshop on "Waves and Parti­ cles in Light and Matter" was held in the Italian city of Trani in celebration of the centenary of Louis de Broglie's birth. As is well known, the relationship between quantum theory and ob­ jective reality was one of the main threads running through the researches of this French physicist. It was therefore in a fitting tribute to him on his 90th birthday that ten years ago an international conference on the same subject was convened in Perugia. On that occasion, physicists from all over the world interested in the problematics of wave-particle duality engaged in thoughtful debates (the proceedings of which were subsequently published) on recent theoretical and experimental developments in our understanding of the foundations of quantum mechanics. This time around, about 120 scientists, coming from 5 continents, in the warm and pleasant atmosphere of Trani's Colonna Conference Center focussed their discussions on recent results concerned with the EPR para­ dox, matter-interferometry, reality of de Broglie's waves, photon detection, macroscopic quantum coherence, alternative theories to usual quantum mechanics, special relativity, state reduction, and other related topics. The workshop was organized in plenary sessions, round tables, and poster sessions, and the present volume collects most-but not all-of the presented papers. A number of acknowledgements are due. We thank, first of all, the contributors, without whose constant dedication this volume could not have been published.