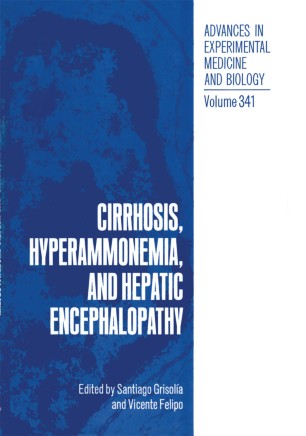 Part of the Advances in Experimental Medicine and Biology book series (AEMB, volume 341)

This volume contains the papers presented in the International Summer Course on "Cirrhosis, Hyperammonemia and Hepatic Encephalopathy," which was one of the prestigious Summer Course, of the Complutense University of Madrid held in EI Escorial, Spain, during August 10-14, 1992. Liver cirrhosis is one of the main causes of death in western countries. In addition there is a series of liver dysfunctions including fulminant hepatic failure, Reye's syndrome and congenital defects of urea cycle enzymes that could lead to hepatic encephalopathy, coma and death. As a consequence of impaired liver function, the ability to detoxify ammonia by its incorporation into urea is diminshed, resulting in increased ammonia levels in blood and brain. Hyperammonemia is considered one of the main factors in the mediation of hepatic encephalopathy and the classical clinical treatments are directed towards reducing blood ammonia levels. A part of the book is therefore devoted to the study of certain aspects of ammonia metabolism such as the regulation of the urea cycle, the main mechanism of ammonia detoxification in mammals, which is located mainly in the liver. The metabolism of ammonia in other tissues, including brain, is also presented, as well as the effects of hyperammonemia on brain metabolism and function and on brain microtubules. The control of cerebral protein breakdown is reviewed. The classical and some recently proposed clinical treatments as well as nutritional considerations in the management of patients with liver failure are also discussed.