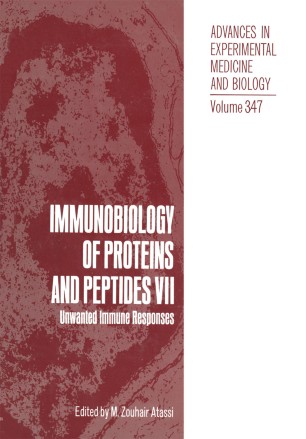 Immunobiology of Proteins and Peptides VII

Part of the Advances in Experimental Medicine and Biology book series (AEMB, volume 347)

The articles in this volume represent papers delivered by invited speakers at the 7th International Symposium on the Immunobiology of Proteins and Peptides. In addition, a few of the abstracts submitted by participants were scheduled for minisymposia and some of the authors, whose presentations were judged by the Scientific Council to be of high quality, were invited to submit papers for publication in this volume. This symposium was established in 1976 for the purpose of bringing together, once every two or three years, active investigators in the forefront of contemporary immunology, to present their findings and discuss their significance in the light of current concepts and to identify important new directions of investigation. The founding of the symposium was stimulated by the achievement of major breakthroughs in the understanding of the immune recognition of proteins and peptides. We believed that these breakthroughs will lead to the creation of a new generation of peptide reagents which should have enormous potential in biological, therapeutic, and basic applications. This anticipated explosion has in fact since occurred and many applications of these peptides are now being realized. The seventh symposium focused on immune responses that have undesirable effects on the host, hence we named them unwanted immune responses. Two major aspects of unwanted immune responses were discussed at the symposium: Allergy and Autoimmunity.