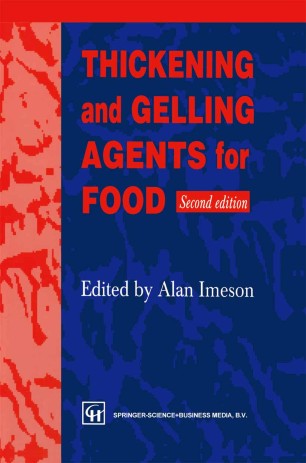 Thickening and Gelling Agents for Food

The sucess of the first edition of Thickening and Gelling Agents for Food underlined the keen interest in functional food ingredients. In this second edition, the text has been completely revised and updated to reflect the current market trends. New chapters have been included to broaden the scope of materials used by the food technologist. Agar and konjac gum (flour), probably the most traditional gelling and thickening agents, but most widely utilised in the Far East, have been given greater prominence. Microcrystalline cellulose, a relatively new food stabiliser used widely in the USA, has been included. The preparation of traditional products using formulations suited to bulk food processings is described while new areas focus on low fat and low calorie foods where there is an even greater demand for controlling the stability, viscosity, gelation and mouthfeel using a broad range of thickening and gelling agents. Recent legislative changes in the USA and EC impact the use of additives including gellan gum, konjac flour, carrageenan, tara gum and microcrystal­ line cellulose: some changes have increased the number of additives ap­ proved for foods, while others allow a broader range of materials to be used in foods. The detailed information on products, properties and applications given in this second edition will enable these highly functional thickening and gelling agents to be used to full advantage.