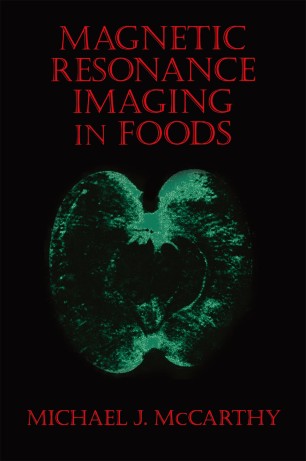 Nuclear magnetic resonance imaging is one of several new experimental tech­ niques which have rec{ ,tly been applied to food systems. NMR in general and nuclear magnetic resonance imaging are powerful probes of the microscopic and macroscopic changes occurring in foods during processing, storage and utilization. The training that food scientists and food engineers have received in the past has often omitted specific courses in physical chemistry that form the theoretical and practical foundation necessary to fully utilized magnetic resonance experimental techniques. The goal of Magnetic Resonance Imaging in Foods is to introduce food scien­ tists and food engineers to magnetic resonance imaging and provide a basis for further study. As such the book begins with two chapters of an introductory nature. The first chapter introduces magnetic resonance phenomena, NMR in general, and MRI in detail. Particular emphasis is given to the limitations and typical ranges available for studying particular phenomena, for example, the range of diffusivities that can be studied using commercial grade NMR equipment. Chapter 2 gives a brief introduction to the classical physical model of NMR first introduced by Felix Bloch in 1946 and aspects important to the interpretation of MRI data. This chapter is provided for the researchers and students interested in more details of the basic theory. Chapter 2 can be skipped by those individuals not requiring more information on the basic theory of NMR. The next several chapters of the book are on applications of MRI to food systems.