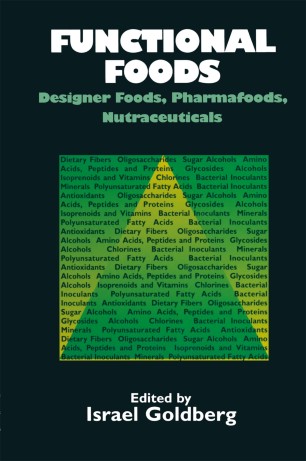 "Accuse not Nature! She has done her part; Do Thou but Thine!" Milton, Paradise Lost 1667 The concept that nature imparted to foods a health-giving and curative function is not new. Herbal teas and remedies have been used for centuries and continue in use in many parts of the world today. In modern society, we have turned to drugs to treat, miti­ gate, or prevent diseases. However, since the discovery of nutrients and our increasing analytical capabilities at the molecular level, we are beginning to become more knowledgeable of the biochemical structure-function relationship of the myriad of chemicals that occur naturally in foods and their effect on the human body. The holistic approach to medicine and diet that began in the 1970s has now seen a renewal as we realize that certain foods, because of the presence of specific biochemicals, can have a positive impact on an individual's health, physical well-being, and mental state. In fact, because of the negative image of drugs, and the grey area of s- xi Foreword xii plements, the use of foods that are "functional" is becoming a growth area for the food industry. In Japan this concept has led to one of the largest growing markets, where they have defined "functional foods" as regular foods derived only from naturally occurring in­ gredients. The Japanese further require that the functional foods be consumed as part of the diet and not in supplement form (i. e.