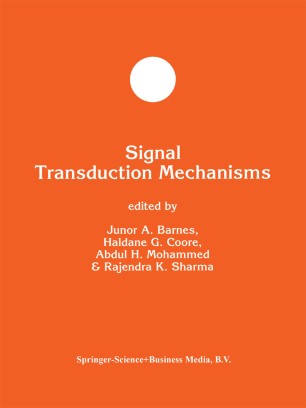 Part of the Developments in Molecular and Cellular Biochemistry book series (DMCB, volume 15)

This volume contains the proceedings of an International Symposium on `Second Messenger Systems - Molecular, Cellular and Behavioural Aspects', which was held at Tobago on June 16-17, 1994.
The interaction of an extracellular agonist (First Messenger) with its plasma membrane receptor leads to the transmission of a signal across the cell membrane and results in the production and/or activation of other signalling molecules (Second Messengers). These Second Messengers control the action of many protein kinases and protein phosphatases and so lead to cellular responses. Although the biochemical basis of the transduction of signals in the main signalling systems in eukaryotic cells is probably largely known, intensified research is ongoing in the following areas: the discovery of specific substrates for many protein kinases, elucidation of the biological significance of the differential tissue expression and heterogeneity of many signalling proteins, and the unravelling of diverse interactions (such as signal potentiation, synergism, antagonism and neuronal co-transmission) between signalling systems. As knowledge from such studies accumulates, it is becoming clear that the `cross talk' interactions between signalling systems are important features of dynamic cell regulation.
This volume is designed to summarize some aspects of the current work on various Second Messenger Systems and the integration of signals with respect to plasma membrane receptors. Second Messenger generation and degradation, protein kinase and phosphatase, cell cycle control, and cellular learning and memory.