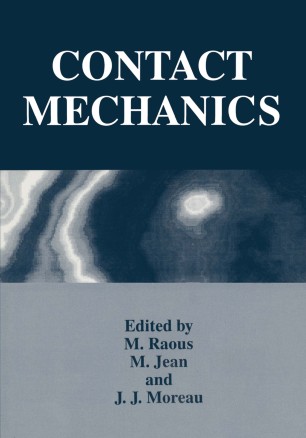 This proceedings volume contains 66 papers presented at the second "Contact Mechanics International Symposium" held in Carry-Le-Rouet. France. from September 19th to 23rd. 1994, attended by 110 participants from 17 countries. This symposium was the continuation of the first CMIS held in 1992 in Lausanne. of the Symposium Euromech 273 "Unilateral Contact and Dry Friction" held in 1990 in La Grande Motte. France. and of the series of "Meetings on Unilateral Problems in Structural Analysis" organized in Italy. every other year. during the eighties. The primary purpose of the symposium was to bring specialists of contact mechanics together in order to draw a representative picture of the state of the art and to identify new trends and new features in the field. In view of the contributions made. one may assert that the mechanics of contact and friction has now reached a stage where the foundations are clear both from the mathematical and from the computational standpoints. Some of the difficulties met may be identified by saying that frictional contact is governed by resistance laws that are non smooth and whose flow rule is not associated with the yield criterion through the traditional normality property.