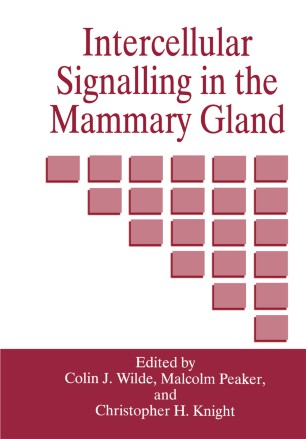 Intercellular Signalling in the Mammary Gland

All being done, we went to Mrs Shipmans, who is a great butter-woman; and I did see there the most of milke and cream, and the cleanest, that I ever saw in my life (29 May 1661). Among others, Sir Wm. Petty did tell me that in good earnest, he hath in his will left such parts of his estate to him that could invent such and such things -as among others, that could discover truly the way of milk coming into the breasts of a woman ... (22 March 1665). My wife tells me that she hears that my poor aunt James hath had her breast cut off here in tow- her breast having long been out of order (5 May 1665). From the Diary of Samuel Pepys, published as The Shorter Pepys (edited by R. Latham), Penguin Books (1987) The long-standing ultimate importance of research on the mammary gland is illustrated by the importance attached to cows' milk for human consumption, to human lactation and to breast cancer by Samuel Pepys and his contemporaries in the middle of the 17th century. Research has tended to develop in isolation in these three areas of continuing contemporary importance largely because in most countries, the underlying science of agricultural productivity is funded separately from the underlying science of human health and welfare.