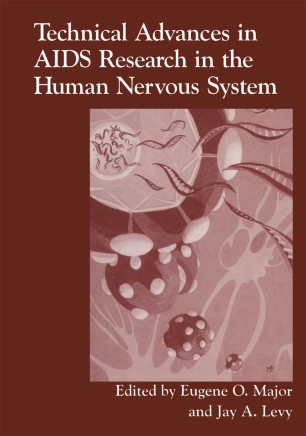 Technical Advances in AIDS Research in the Human Nervous System

It is remarkable that each month the quantity ofarticles published on AIDS still that address numbers in the thousands. The basic, clinical and sociological aspects this epidemic have been vigorously investigated, and equally as extensively reported in traditional as well as new journals. Therefore, what can the reader ofthis volume expect to find that is different from the information already found in the literature? The authors of this text met in October 1993 to discuss not only AIDS and its effects on the nervous system but also to address the problem from the point of view of the diverse technologies that are used in understanding the disease. Just as the recog­ nition ofoncogenic viruses gave us insights into cellular genes that govern growth, the study ofHIV-I in the nervous system has opened new areas ofinvestigation in the nervous system. Use of human fetal and glioma-derived cell cultures, discovery of toxins in the nervous system, release and damage of cytokines in the brain, the neuropathic effects of HIV proteins, the investigation of new treatment for neuro­ AIDS, and virus detection strategies to identify latent HIVI infection are described in this volume. Basic and clinical investigators from more than thirty laboratories around the world contributed to the ideas discussed at the meeting, "Technical Advances in AIDS Research in the Human Nervous System.