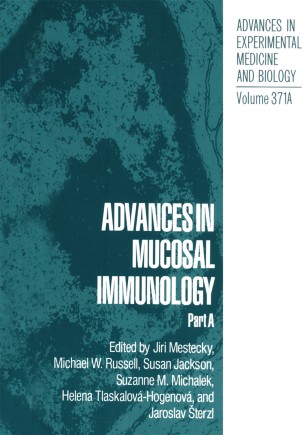 Part of the Advances in Experimental Medicine and Biology book series (AEMB, volume 371)

The Seventh International Congress of Mucosal Immunology held in Prague, the beautiful old capital of The Czech Republic, 16-20 August 1992, was the first to be sponsored by the Society for Mucosal Immunology, and was the largest since their inception 20 years earlier in Birmingham, Alabama. It was attended by 624 participants who gave 538 presentations, more than 10 times the numbers of the first meeting; these proceedings contain 354 papers that were submitted for publication. The political events in Europe that made it possible to hold this Congress in Prague also allowed for the first time the participation of large numbers of scientists from Eastern Europe, as weil as from Asia, and the organizers were truly gratified by this happy circumstance. It is now clear not only that mucosal immunityencompasses the huge area of mucosal surfaces and most physiological organ systems, but also that mucosal immunology extends over the whole global surface and all continents! The sheer size of the Congress and number of manuscripts unfortunately entailed some unexpected problems in editing and assembling the proceedings, partly due to the diversity of linguistic styles not represented at earlier meetings, and we apologize to the authors who have patiently awaited the publication of their contributions.