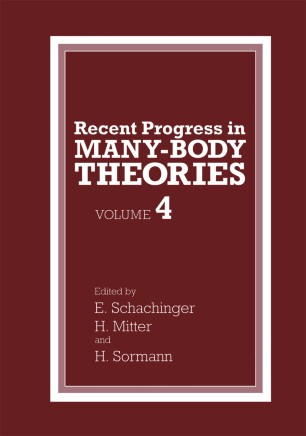 The present volume contains the text of the invited talks delivered at the Eighth International Conference on Recent Progress in Many-Body Theories held at SchloB Seggau, Province of Styria, Austria, during the period August 22-26, 1994. The pro­ ceedings of the Fifth Conference (Oulu, Finland 1987), the Sixth Conference (Arad, Israel 1989) and the Seventh Conference (Minneapolis, USA 1991) have been published. by Plenum as the first three volumes of this series. Papers from the First Conference (Trieste, Italy 1978) comprise Nuclear Physics volume A328, Nos. 1 and 2, the Second Conference (Oaxtepec, Mexico 1979) was published by Springer-Verlag as volume 142 of "Lecture Notes in Physics," entitled "Recent Progress in Many Body Theories." Vol­ ume 198 of the same series contains the papers from the Third Conference (Altenberg, 1983). These volumes intend to cover a broad spectrum of current research topics in physics that benefit from the application of many-body theories for their elucidation. At the same time there is a focus on the development and refinement of many-body methods. One of the major aims of the conference series has been to foster the exchange of ideas among physicists working in such diverse areas as nuclear physics, quantum chemistry, complex systems, lattice Hamiltonians, quantum fluids and condensed matter physics. The present volume contains contributions from all these areas. th The conference was dedicated on the occasion of Ludwig Boltzmann's 150 birthday.