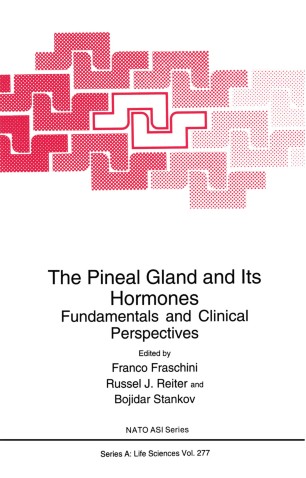 The Pineal Gland and Its Hormones

This volume contains the written contributions to the proceedings of a workshop related to the pineal gland and its hormones, which was held in Erice, Italy, on June 7 -June 13, 1994. This series of workshops, which began in 1982 and which have been held at four-year intervals since that time, has provided important continuity for advancing the state of knowledge relating to this very important investigative area. The enthusiasm for these conferences has increased steadily, as reflected in the number of individuals applying to attend and in the input of individuals who participate in the meeting. The 1994 meeting was important because of its timeliness. In the two years preceding the meeting a number of revolutionary discoveries were made relative to the actions of the pineal hormone melatonin. The Xenopus melatonin receptor was cloned, melatonin was demonstrated to be a potent antioxidant, the significance of melatonin receptors at the level of pars tuberalis in the regulation of the hypothalamo-pituitary-gonadal axis was questioned, a number of melatonin receptor analogues were discovered and successfully utilized, the mechanisms by which melatonin retards initiation and promotion of cancer was further elucidated, the clinical aspects of the pineal gland was re-scrutinized. Reviews relating to each of these subjects, as well as many others, are contained in this proceedings book. This volume represents an up-to-date repository for the most recent information related to this rapidly advancing field.