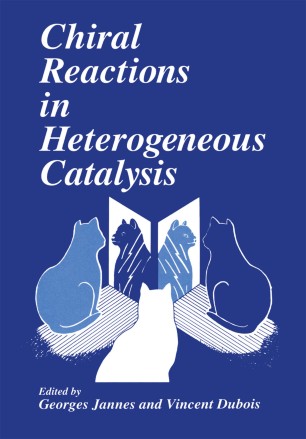 It was a great honor for us to organize ChiCat, a symposium devoted to Chiral Reactions in Heterogeneous Catalysis and to be the hostsofmore than 120 scientists coming from everywhere in the industrialized world, to celebrate together one century of existence ofInstitut Meurice. This school was established in 1892when an industrial chemist, named Albert Meurice, decided to educate practical chemists according to the perceived needs ofthe industry ofthat time. This is exactly what we are still trying to do. It is the reason why, thirty years ago, we started a research activity in catalysis, and why we progressively devote this research to the applications of catalysis in the field of fine chemicals. In this respect, we are very close to another initiative of Albert Meurice, who started the first production of synthetic pharmaceuticals in Belgium during World War I. This business later on became a part ofthe Belgian corporation DCB, still very active in pharmaceuticals today. The school created by Albert Meurice merged in the fifties with another school that had been created to meet the same needs in the field of the food industries, mainly distilleries and breweries. This merger was done in the frame of the establishment of CERIA. For people in catalysis, ceria stands for cerium oxide, but for those who engineered the concept, CERIA stood for Center of Education and Research for the Food and Chemical Industries.