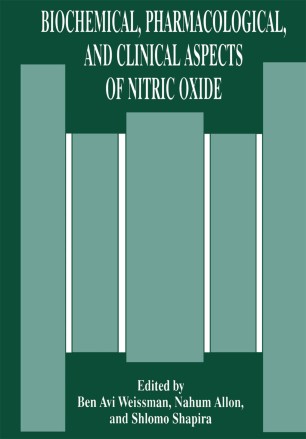 A decade ago, for most scientists investigating various issues in life sciences the word "NO" was used in a negative context. It is astounding to observe how recently researchers are addressing the issue of NO, namely, nitric oxide, in over fifty publications weekly. Science journal, while naming nitric oxide: "Molecule of the Year" (December 1992), said it all: "NO news is good news. " For a long period of time NO was considered as a pollutant and every ecology­ minded person tried to eliminate it. It was the discovery of NO involvement in the process of host killing by macrophages and several years later the finding that EDRF is none else but NO, that promoted this field. Nitric oxide's major role in the control of blood pressure is merely one factor of an extensive list of effects and functions attributed to it. NO is implicated in long-term potentiation (LPT), a principal process involved in memory consolidation and it is considered as the main biochemical substance responsible for penile erection. It should be noted that additional roles for NO are discovered continuously as many laboratories join the quest for the mystery of this small molecule. The observation that NO is involved in various biological processes is not unique, as other second messengers (i. e. , cyclic AMP), participate in a diverse set of functions.