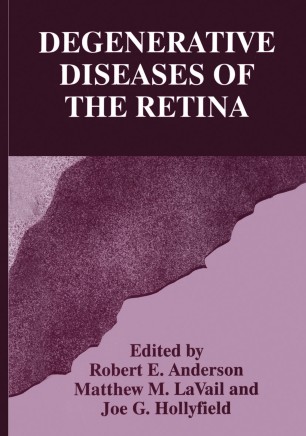 Degenerative Diseases of the Retina

In 1984, we organized a two-day symposium on retinal degenerations as part of the biennial meeting of the VI International Society for Eye Research, held in Alicante, Spain. The success of this first meeting led to the second held, two years later in Sendai, Japan, organized as a satellite of the VII ISER. We were fortunate that these meetings began at a time of vigorous research activity in the area of retinal degenerations, thanks to the financial support of the Retinitis Pigmentosa Foundation and the strong encouragement of its scientific director, Dr. Alan Laties. Significant advances were made so that every two years scientists were eager to meet to share their findings. The programs included presentations by both basic and clinical researchers with ample time for informal discussions in a relaxed atmos­ phere. Many investigators met for the first time at these symposia and a number of fruitful collaborations were established. This book contains the proceedings of the VI International Symposium on Retinal Degenerations held November 6-10, 1994, in Jerusalem. As with the other meetings, some new areas were covered. One session was devoted to apoptosis, an important process involved in cell death in inherited retinal degenerations. Another session was on invertebrate photoreceptors, where numerous mutations have now been identified that lead to altered function or degeneration of the retina. All participants were invited to submit chapters and most complied. We thank them for their contributions.