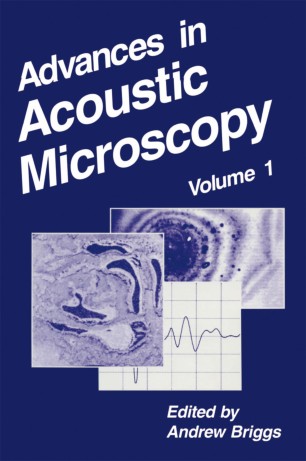 In 1992 Acoustic Microscopy was published by Oxford University Press, in the series of Monographs on the Physics and Chemistry of Materials. Reviews appeared in the Journal of Microscopy [169 (1), 91] and in Contemporary Physics [33 (4), 296]. At the time of going to press, it seemed that the field of acoustic microscopy had settled down from the wonderful developments in resolution that had been seen in the late seventies and the early eighties and from the no less exciting developments in quantitative elastic measurements that had followed. One reviewer wrote, "The time is ripe for such a book, now that the expansion of the subject has perceptively slowed after it was detonated by Lemons and Quate. " [A. Howie, Proc. RMS 27 (4), 280]. In many ways, this remains true. The basic design for both imaging and quantitative instruments is well-established; the upper frequency for routine imaging is the 2 GHz established by the Ernst Leitz scanning acoustic microscope (ELSAM) in 1984. For the most accurate V(z) measurements, the 225-MHz line-focus-beam lens, developed at Tohoku Univer­ sity a little before then, remains standard. The principles of the contrast theory have been confirmed by abundant experience; in particular the role of surface acoustic waves, such as Rayleigh waves, dominates the contrast in most high­ resolution studies of many materials.