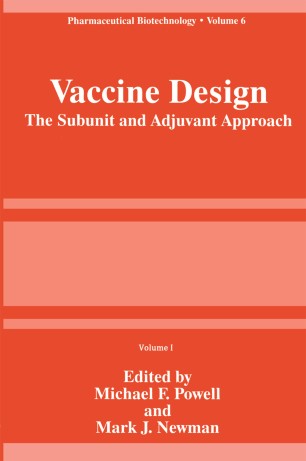 The Subunit and Adjuvant Approach

When my interest was first drawn to the phenomenon of vaccination for virus diseases in the late 1930s, the state of the art and the science of vaccine design was not far advanced beyond the time of Jenner at the end of the 18th century and of Pasteur a century later. In the 1930s it was still believed that for the induction of immunity to a virus-caused disease the experience of infection was required, but not for a toxin-caused disease such as diphtheria or tetanus, for which a chemically detoxified antigen was effective for immu­ nization. This prompted the question as to whether it might be possible to produce a similar effect for virus diseases using nonreplicating antigens. When in the 1930s and 1940s it was found possible to propagate influenza viruses in the chick embryo, protective effects could be induced without the need to experience infection by the use of a sufficient dose of a noninfectious influenza virus preparation. Later in the 1940s, it became possible to propagate polio and other viruses in cultures of human and monkey tissue and to immunize against other virus diseases in the same way. Later, with the advent of the era of molecular biology and genetic engineering, antigens and vaccines could be produced in new and creative ways, using either replicating or nonreplicating forms of the appropriate antigens for inducing a dose-related protective state.