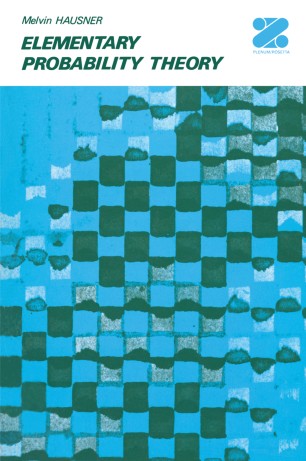 This text contains ample material for a one term precalculus introduction to probability theory. lt can be used by itself as an elementary introduc­ tion to probability, or as the probability half of a one-year probability­ statistics course. Although the development of the subject is rigorous, experimental motivation is maintained throughout the text. Also, statistical and practical applications are given throughout. The core of the text consists of the unstarred sections, most of chapters 1-3 and 5-7. Included are finite probability spaces, com­ binatorics, set theory, independence and conditional probability, random variables, Chebyshev's theorem, the law of large numbers, the binomial distribution, the normal distribution and the normal approxi­ mation to the binomial distribution. The starred sections include limiting and infinite processes, a mathematical discussion of symmetry, and game theory. These sections are indicated with an*, and are optional and sometimes more difficult. I have, in most places throughout the text, given decimal equivalents to fractional answers. Thus, while the mathematician finds the answer p = 17/143 satisfactory, the scientist is best appeased by the decimal approximation p = 0.119. A decimal answer gives a ready way of find­ ing the correct order of magnitude and of comparing probabilities.