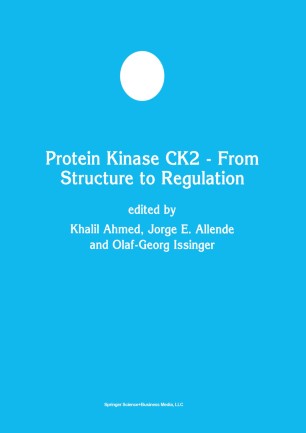 CK2 is a protein serine/threonine kinase which is a highly conserved and ubiquitous protein kinase. It is localized in the cytoplasmic and nuclear compartments, which accords with its multiple functional activities in the cell. Pertinent to this is also the recognition that a large number of putative substrates for this kinase have been identified in various compartments of the cell. New evidence from several laboratories has further reinforced the involvement of CK2 in signal transduction related to many cellular functions, thus underscoring the significance of its functional role in normal and abnormal cell growth and proliferation.

This volume provides an overview of the state of knowledge concerning this intriguing protein kinase. It brings together contributions from leading investigators engaged in research in this field. Key developments during the past three years pertain to the elaboration of the crystal structure and definition of novel functions of the kinase, such as its role as an inhibitor of apoptosis. Additionally, the shuttling of the kinase to various compartments in response to physiological and stress stimuli appears to be a key feature of the functional regulation of its activity in the cell.