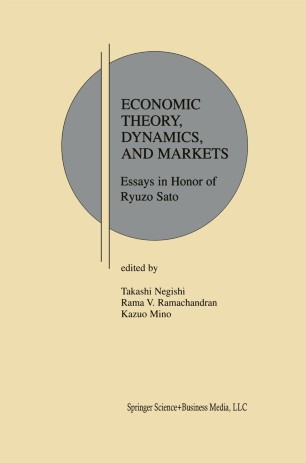 Essays in Honor of Ryuzo Sato

Economic Theory, Dynamics, and Markets. The collection of essays in honor of Ryuzo Sato, written by his colleagues and students, covers the many fields of economic theory and policy to which he has contributed. The first section pays tribute to his contributions to mathematical economics and economic theory. Ryuzo Sato is known for his work in growth theory and technical progress, and the second section has a number of papers on macroeconomics and dynamics. The third section has a number of papers on financial markets and their functioning in Japan and the United States. The next section examines various aspects of the economics of firms and industry. Ryuzo Sato has been very involved in analyzing the economic and business relations between Japan and the United States, and the last section is devoted to comparative analysis of economic systems.