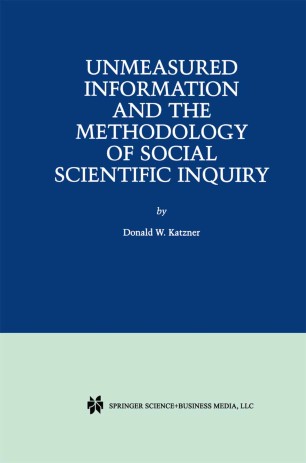 Unmeasured Information and the Methodology of Social Scientific Inquiry

I have three reasons for bringing out the ensuing collection of essays. First, since analysis without measurement (this is generally not the same thing as what is commonly referred to as "qualitative methods" or "qualitative research" in the social science literature) is a relatively new scholarly endeavor, I am striving to enhance its visibility by attracting a wider audience than what would normally be possible with single, narrowly-focused essays published in scat­ tered journals. Second, several of these essays may, in the minds of potential readers, appear to have been published in places that, if not obscure, are at least inconvenient to locate. Collecting them in a single anthology, then, will help to increase their accessibility. Third, I am trying to suggest, as strongly as I can, that analysis without measurement is a viable intellectual enterprise that ought to be taken seriously in social science. This last point will clearly be en­ hanced if the whole that follows turns out, as I hope and suspect it does, to be greater than the sum of its parts. All the same, each reader will have to judge for himself or herself the extent to which I have, through the present collection, successfully made the case for taking up analysis without measurement. The partitioning of these essays into two groups is somewhat, though by no means completely arbitrary.