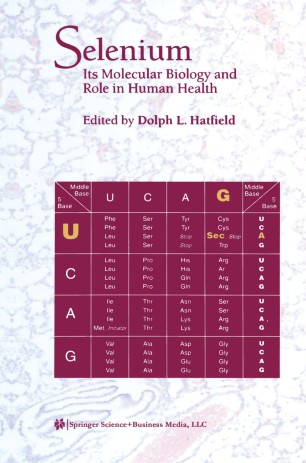 Its Molecular Biology and Role in Human Health

As discussed in this book, a large body of evidence indicates that selenium is a cancer chemopreventive agent. Further evidence points to a role of this element in reducing viral expression, in preventing heart disease, and other cardiovascular and muscle disorders, and in delaying the progression of AIDS in HIV infected patients. Selenium may also have a role in mammalian development, in male fertility, in immune function and in slowing the aging process. The mechanism by which selenium exerts its beneficial effects on health may be through selenium-containing proteins. Selenium is incorporated into protein as the amino acid selenocysteine. Selenocysteine utilizes a specific tRNA, a specific elongation factor, a specific set of signals, and the codeword, UGA, for its cotranslational insertion into protein. It is indeed the 21st naturally occurring amino acid to be incorporated into protein and marks the first and only expansion of the genetic code since the code was deciphered in the mid 1960s.