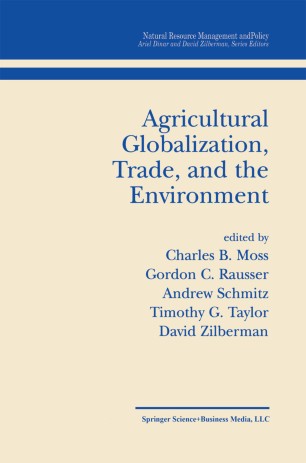 Agricultural Globalization Trade and the Environment

The relative prosperity in U.S. agriculture that attended the passage of the Federal Agriculture Improvement and Reform Act of 1996 was followed by a general decline in U.S. agricultural prices from 1998 to 2000. This trend in declining prices continues through the year 2001, despite the movement toward more liberalized agricultural trade. Trade liberalization has been the result of a variety of factors, including the implementation of the Uruguay Round Agreement, and the establishment of a variety of regional trade agreements, such as the North America Free Trade Agreement. Needless to say, in the face of falling agricultural prices and increasingly liberalized ag­ ricultural trade, the agricultural policy scene is an extremely complex one, both locally and globally. The chapters in this volume look to understand this complexity by ad­ dressing the interaction between trade, the economic well-being of the farm sector, and the possibilities for future policy reform. The chapters collected here explore a number of different issues, including the operation of the tar­ iff-rate quotas established under the Uruguay Round Agreement, the impli­ cations of sanitary and phytosanitary restrictions on trade, and the growing controversy over genetically modified organisms. In addition, several chap­ ters analyze the interaction between agricultural trade and environmental concerns.