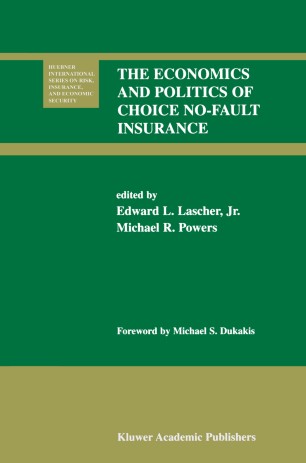 The Economics and Politics of Choice No-Fault Insurance

In recent years, choice no-fault has emerged as a popular but controversial proposal for addressing the problem of high automobile insurance rates. Choice plans offer consumers the option of a lower-cost insurance policy with restrictions on filing lawsuits or a higher-cost policy with full tort rights. Some American states have implemented choice programs, and major federal choice legislation is now pending in the United States Congress.
Choice no-fault has caught the attention of policy makers, the insurance industry, and academics. Until now, however, no single book has pulled together the available research on the topic. The Economics and Politics of Choice No-Fault Insurance fills that gap. Edited by scholars from different disciplines, each of whom has written extensively on automobile insurance issues, the book includes some of the best work in the area. Former Massachusetts Governor and presidential candidate Michael S. Dukakis wrote the foreword.
Contributors include University of Virginia Law Professor Jeffrey O'Connell, widely considered the `father of no-fault,' as well as authors of the influential RAND study of the potential effects of choice no-fault on insurance rates. The book chapters, most of which were written especially for this volume, cover topics ranging from the impact of choice no-fault on accidents and driving behavior, to the effects of choice on medical care usage, to alternative approaches for resolving accidents involving both `no-fault' and `tort' electors, to the political feasibility of choice legislative proposals. Emphasis on the potential advantages of choice no-fault is balanced by consideration of possible ill effects.