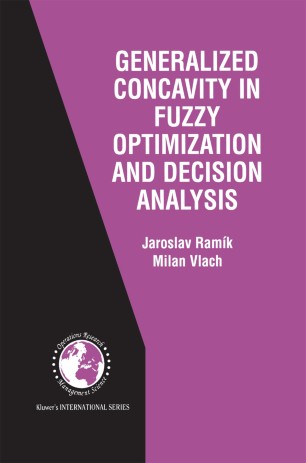 Convexity of sets in linear spaces, and concavity and convexity of functions, lie at the root of beautiful theoretical results that are at the same time extremely useful in the analysis and solution of optimization problems, including problems of either single objective or multiple objectives. Not all of these results rely necessarily on convexity and concavity; some of the results can guarantee that each local optimum is also a global optimum, giving these methods broader application to a wider class of problems. Hence, the focus of the first part of the book is concerned with several types of generalized convex sets and generalized concave functions. In addition to their applicability to nonconvex optimization, these convex sets and generalized concave functions are used in the book's second part, where decision-making and optimization problems under uncertainty are investigated.
Uncertainty in the problem data often cannot be avoided when dealing with practical problems. Errors occur in real-world data for a host of reasons. However, over the last thirty years, the fuzzy set approach has proved to be useful in these situations. It is this approach to optimization under uncertainty that is extensively used and studied in the second part of this book. Typically, the membership functions of fuzzy sets involved in such problems are neither concave nor convex. They are, however, often quasiconcave or concave in some generalized sense. This opens possibilities for application of results on generalized concavity to fuzzy optimization. Despite this obvious relation, applying the interface of these two areas has been limited to date. It is hoped that the combination of ideas and results from the field of generalized concavity on the one hand and fuzzy optimization on the other hand outlined and discussed in Generalized Concavity in Fuzzy Optimization and Decision Analysis will be of interest to both communities. Our aim is to broaden the classes of problems that the combination of these two areas can satisfactorily address and solve.