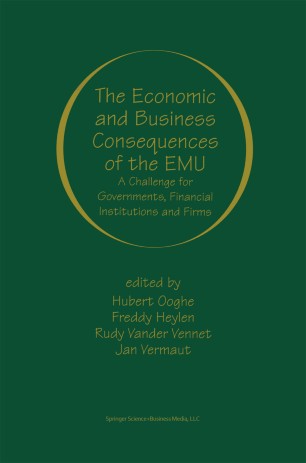 The Economic and Business Consequences of the EMU

A Challenge for Governments, Financial Institutions and Firms

The Economic and Business Consequences of the EMU A Challenge for Governments, Financial Institutions and Firms Hubert Ooghe Conference Chairman, Vlerick Leuven Gent Management School alld Ghent University EMU finally got under way on 1 st January 1999. Since then 11 European countries share a common currency, the Euro, and pursue a common monetary policy managed by the European Central Bank (ECB). After forty years of economic integration, Euroland has the wherewithal with which to enter the 21 st century. However monetary union has implications for nearly all areas of economic activity and decision-making. Throughout the academic world researchers are fully occupied with the theoretical analysis of the impact of the Euro and the effects of incorporating the new operational framework into their economic models. Businesses and government departments are concerned primarily with the practical implementation of the single currency. For all those who playa part in the economy, it is a question of making the most of the macro and micro­ economic opportunities offered by the Euro and minimising any threats. On 17th and 18th March 2000, after the EMU and Euro were in operation for one year, an international conference was held in Ghent (Belgium) on the economic consequences of the introduction of the EMU and the Euro for governments, financial institutions and firms.