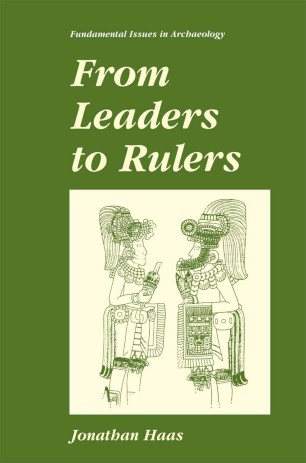 From Leaders to Rulers

Part of the Fundamental Issues in Archaeology book series (FIAR)

The evolution of complex cultural systems is marked by a number of broad, sweeping patterns that characterize many different cultures at different points in time across the globe. Over the course of the past 100,000 years, there has been a general evolutionary trend for cultural systems to get larger and more complex. A consistent element in the broad course of cultural evolu­ tion has been the emergence and subsequent development of centralized forms of political organization. The record of the first modern humans illuminates a global wide pat­ tern of relative social equality and decentralized deciSion-making processes. Prior to about 10,000 years ago, there are no indications of clear social, political, or economic hierarchies. In these early millennia archaeological markers of social ranking are lacking and there is a similar absence of evidence pointing to the presence of leaders, chiefs or rulers. The pattern of social equality began to change at different moments and at different rates in various parts of the world in the course of the last 10,000 years. In some areas, such as Mesopotamia, politically centralized hierarchies emerged very early and developed rapidly, while in others, such as the Arctic, political centralization never emerged outside the context of Western colonialism. In every culture area, the origins and development of politically cen­ tralized social systems and the emergence of leaders and rulers followed a unique evolutionary trajectory depending on local history and environment.