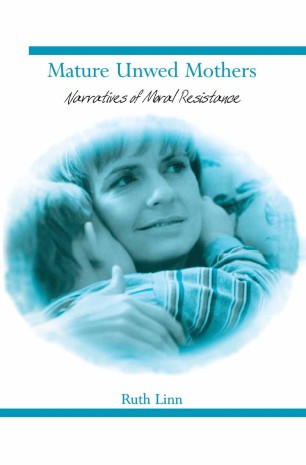 I have often wondered if the opposition to women's choosing to abort a pregnancy masks a fear of women choosing to have and raise children on their own. When a woman separatesmotherhood from marriage, she claims a freedom in the realm of intimate rela­ tionships that may be as fundamental as Freedom of Conscience or Freedom of Association. Yet, we do not usually think about women's decisions concerning motherhood in these terms. In a pair of remarkable studies begun in the 1980s, Ruth Linn-pregnant at the time, and married to a medical officer in the Israeli army-took the study of moral psychology into two highly controversial arenas of moral action: Israeli soldiers who refused to serve in Lebanon and single women who refused to remain childless. While conscientious objection to war has long been recognized as an act ofmoral resistance and courage,women who question societal norms and values linking motherhood with marriage, are typically dismissed as bad women. Rather than approaching these questions in the abstract, Linn chose to inter­ view women who made the decision to have and raise children on their own. What she found was that in the course of making this decision, women came to see themselves as moral resisters. In freeing their childbearing capability from men's control,they were also freeing their capacity to love. The very title of this book, Mature Unwed Mothers, calls us to think about what we mean by maturity on the part of mothers.