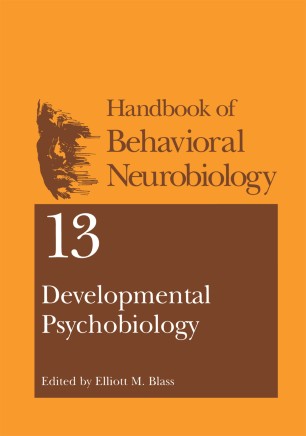 ELLIOTT M. BLASS Fifteen years have passed since the first volume on developmental psychobiology (Blass, 1986) appeared in this series and 13 since the publication of the second volume (Blass, 1988). These volumes documented the status of the broad domain of scientific inquiry called developmental psychobiology and were also written with an eye to the future. The future has been revolutionary in at least three ways. First, there was the demise of a descriptive ethology as we had known it, to be replaced first by sociobiology and later by its more sophisticated versions based on quantitative predictions of social interactions that reflected relatedness and inclu­ sive fitness. Second, there was the emergence of cognitive science, including cogni­ tive development, as an enormously strong and interactive multidisciplinary effort. Making the "functional" brain more accessible made this revolution all the more relevant to our discipline. In the laboratory, immunocytochemical detection of immediate / early genes, such as los, now allows us to trace neuronal circuits activated during complex behaviors. The "functional" brain of primates, especially humans, was also made very accessible through neuroimaging with which we can look at and into brains as they solve and attempt to solve particular tasks. Those of us who were trained in neurology as graduate students two or three decades ago recognize only the people in white coats and patients in beds or on gurneys when we visit neurologi­ cal units today. The rest is essentially new.