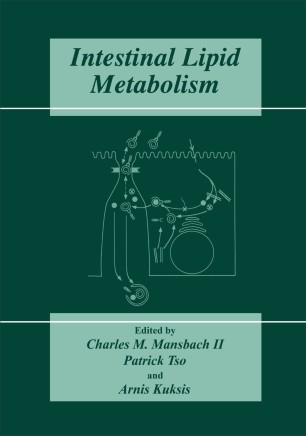 This book was stimulated by the enthusiasm shown by attendees at the meetings in Saxon River, VT, sponsored by the Federation ofAmerican Societies for Experimental Biology (FASEB), on the subject of the intestinal processing of lipids. When these meetings were first started in 1990, the original organizers, two of whom are editors ofthis volume (CMM and PT), had two major goals. The first was to bring together a diverse group ofinvestiga­ tors who had the common goal of gaining a better understanding of how the intestine ab­ sorbs lipids. The second was to stimulate the interest of younger individuals whom we wished to recruit into what we believed was an exciting and fruitful area ofresearch. Since that time, the field has opened up considerably with new questions being asked and new an­ swers obtained, suggesting that our original goals for the meetings were being met. In the same spirit, it occurred to us that there has not been a recentbook that draws to­ gethermuch ofthe informationavailableconcerninghow the intestineprocesses lipids. This book is intended to reach investigators with an interest in this area and their pre- and post­ doctoral students. The chapters are written by individuals who have a long-term interest in the areas about which they write, and many have been speakers at the subsequent FASEB conferences that have followed on the first.