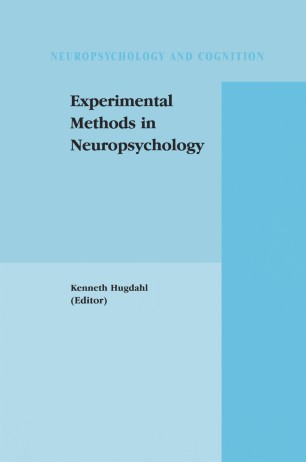 Part of the Neuropsychology and Cognition book series (NPCO, volume 21)

Clinical neuropsychology typically employs large standardized test-batteries to cover the cognitive deficits caused by brain lesions and neurodegenerative diseases. The neuropsychologist moves between three levels of explanation; the behavioral level, the cognitive level and the brain level. The behavioral level is measured as actual performance on a test, i. e. the obtained test score. The cognitive level refers to the underlying cognitive processes that are reflected in the test scores. The brain level, finally, refers to the neural underpinnings and substrates to the cognitive processes. The recent decades have witnessed a dramatic increase in our knowledge about cognitive processes and the underlying neural substrates. Experimental techniques and paradigms have played an important role in the accumulation of new knowledge in this field. Thus, there is a need to present a collection of experimental paradigms and techniques to neuropsychology. Some of these paradigms and techniques have however a long history in neuropsychology, like dichotic listening and EEG measures, while others are new and novel to most neuropsychologists like animal model paradigms and brain imaging and brain stimulation. Experimental techniques typically aim at discovery of causal relationships and with a focus on search for mechanisms. In the first chapter, Merill Hiscock presents an overview of experimental techniques and its adaptation in clinical neuropsychology, with a focus on behavioral techniques and methods.