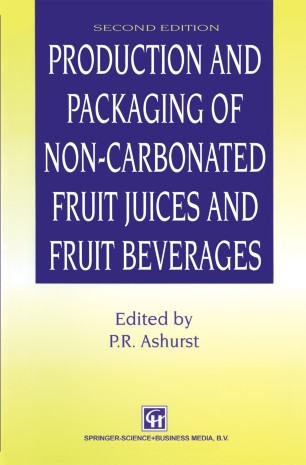 Production and Packaging of Non-Carbonated Fruit Juices and Fruit Beverages

In the period of about five years since the first edition of this book appeared, many changes have occurred in the fruit juice and beverage markets. The growth of markets has continued, blunted to some extent, no doubt, by the recession that has featured prominently in the economies of the major consuming nations. But perhaps the most significant area that has affected juices in particular is the issue of authenticity. Commercial scandals of substantial proportions have been seen on both sides of the Atlantic because of fraudulent practice. Major strides have been made in the development of techniques to detect and measure adulterants in the major juices. A contri­ bution to Chapter 1 describes one of the more important scientific techniques to have been developed as a routine test method to detect the addition of carbohydrates to juices. Another, and perhaps more welcome, development in non-carbonated beverages during the past few years is the rapid growth of sports drinks. Beverages based on glucose syrup have been popular for many years, and in some parts of the world isotonic products have long featured in the sports arena. A combination of benefits is now available from a wide range of preparations formulated and marketed as sports drinks and featuring widely in beverage markets world-wide. A new chapter reviews their formulation and performance characteristics. Another major trend in the area offruit-containing non-carbonated bever­ ages is the highly successful marketing of ready-to-drink products.