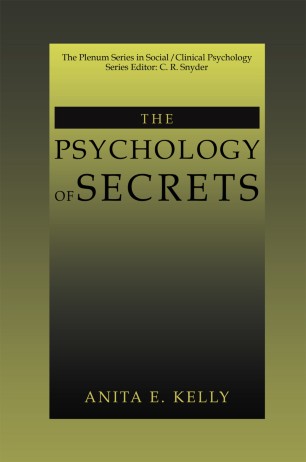 The Psychology of Secrets

On an MTV special aired in 2000, young interviewees were asked to confess the worse thing they were ever told during a romantic breakup. One person tearfully responded "that I suck in bed. " More recently, an acquaintance of mine admitted to his new girlfriend that he "has a mean streak. " She decided not to date him after that. Another memorable and painful example of openness occurred years ago when I served as a member of a suicide intervention team. I was called to a very disturbing scene in an upscale neighborhood to console a woman who was threaten­ ing to take her life on the lawn in front of her children. Her husband had just confessed his long-term affair to her that morning and she felt that her world was coming apart. Fortunately, she did not take her life but was left with the humiliation of haVing her neighbors know about her private troubles. The question these examples bring to mind is, "Why do people so often reveal potentially stigmatizing personal information to others?" The reader probably has an intuitive answer to this question already. It can seem like such a burden-even torture-to keep secrets from other people. Hiding such things as feelings of discontent from a boyfriend or girlfriend, violations of the law from close friends, and indiscretions from employers can be alienating. People want others to know them; therefore they often end up disclosing self-incriminating information.