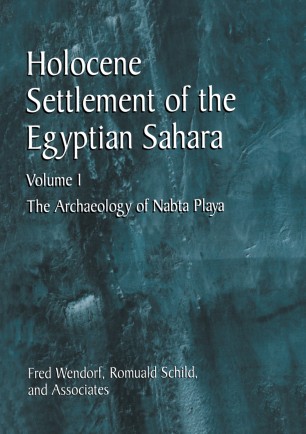 Holocene Settlement of the Egyptian Sahara

Volume 1: The Archaeology of Nabta Playa

by Fred Wendorf and Romuald Schild The Eastern Sahara is a fascinating place to study structures. These larger, more complex sites are almost prehistory. Confronted with the stark reality of a hyper­ always in the lower parts of large basins, most of which arid environment that receives no measurable rainfall, were formed by deflation during the Late Pleistocene lacks vegetation, and is seemingly without life, it would hyper-arid interval between about 65,000 and 13,000 seem to be an unlikely place to find a rich and complex years ago. Their location near the floor of these basins mosaic of archaeological remains documenting past was influenced primarily by one factor - water. During human presence. Despite this impression of a hostile wet phases, runoff from extensive catchment areas environment, there is widespread and abundant caused the development of large, deep, seasonal lakes, archaeological evidence. or playas, in the lowermost parts of these basins. This It is obvious that this area was not always a lifeless surface water would last for several weeks or months desert. Faunal and plant remains found in the excavations after the seasonal rains, and by digging wells after the at Holocene-age settlements, dating between 9500 and playa became dry, water could still be obtained during 5000 radiocarbon years ago, indicate that rainfall during most, if not all, of the dry season.