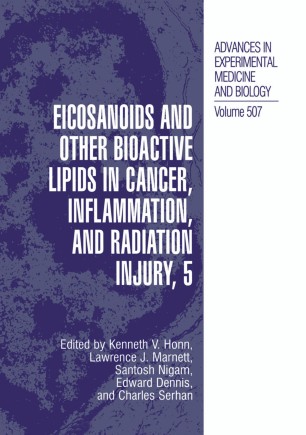 Eicosanoids and Other Bioactive Lipids in Cancer, Inflammation, and Radiation Injury, 5

Part of the Advances in Experimental Medicine and Biology book series (AEMB, volume 507)

This volume represents a collection of contributions from the 6th International Conference on Eicosanoids and Other Bioactive Lipids in Cancer, Inflammation, and Related Diseases held in Boston from September 12-15, 1999. The mission of this meeting was to bring together senior and junior investigators to both announce and examine their recent advancements in cutting-edge research on the roles and actions of lipid mediators and their impact in human physiology and disease pathogenesis. The meeting focused on new concepts in these areas of interest to both clinicians and researchers. The program included several outstanding plenary lectures and presentations by leading experts in the fields of cancer and inflammation. In addition, the Boston meeting presented three Young Investigator awards, one in each of the major focus areas. The meeting was exciting and proved to be very memorable. The program was developed with an emphasis on recent advances in molecular and of lipid mediators relevant in cellular mechanisims involved in the formation and actions inflammation and cancer. Plenary lectures were presented by Prof. Bengt Sammuelsson (Karolinska Institute, Stockholm; 1982 Nobel Laureate in Physiology or Medicine) and Prof. E. 1. Corey (Harvard University; 1990 Nobel Laureate in Chemistry). Both of these plenary lectures were held on Day 1, which set an exciting tone for this meeting. Immediately following these plenary lectures, three simultaneous breakout sessions were held, one of inflammation, a second on cancer and synthesis of novel inhibitors, and a third on enzymes-lipoxygenases/cyclooxygenases and inhibitors.