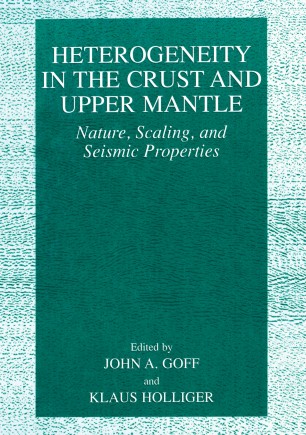 Heterogeneity in the Crust and Upper Mantle

Most of our knowledge about the physical structure and the chemical composition of the Earth's deep interior is inferred from seismic data. The interpretation of seismic waves generally follows the assumption that the Earth's physical structure is grossly layered and that fluctuations of the physical parameters within individual layers are smooth in structure and small in magnitude. While this view greatly facilitates the analytic and interpretative procedure, it is clearly at odds with evidence from outcrops and boreholes, which indicates that compositional, structural and petrophysical heterogeneity in the Earth prevails over a wide range of scales.

This book is the first to unify three different views of crustal and upper mantle heterogeneity. It brings together the geological view, which is derived from the analysis of crustal exposures and deep boreholes; the stochastic view, which attempts to find order and structure in these seemingly chaotic data; and the seismological view, which considers the end product of the complex interaction of seismic energy with the heterogeneous structure at depth. John Goff and Klaus Holliger have compiled chapters that explore and quantify the relationship between geological and petrophysical heterogeneity and its seismic response, and use seismic data to probe the fabric of the Earth's interior. Geologists, geostaticians, and geophysicists alike will benefit from the integrative perspective presented in Heterogeneity in the Crust and Upper Mantle: Nature, Scaling, and Seismic Properties, making this text an unparalleled reference for professionals and students in Earth science fields.

"Primarily aimed at the researcher, this book provides an excellent introductory overview to the subject, which should be read by any Earth Scientist wishing to gain an insight into the characterisation and imaging of crustal and upper mantle heterogeneity. It should be an essential part of any reference collection." (Richard England, University of Leicester, UK in The Eggs, #6, December 2003)
"In summary, this well-written volume provides a glimpse into the highly specialized but critically important field of studying small-scale heterogeneity in structures an dprocesses related to deformation, igneous intrusion, and sedimentation. The presentation of material achieves an excellent balance between a theoretical and an observational approach so that any reader will be able to gain entry into this burgeoning field." (John H. McBride, Brigham Young University, USA in Eos, 85:15, April 2004)