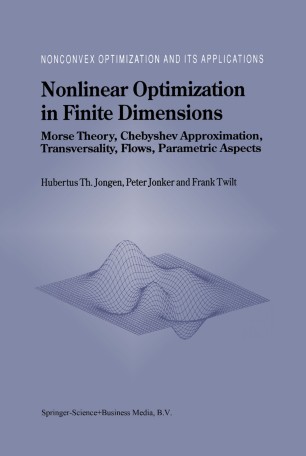 Part of the Nonconvex Optimization and Its Applications book series (NOIA, volume 47)

At the heart of the topology of global optimization lies Morse Theory: The study of the behaviour of lower level sets of functions as the level varies. Roughly speaking, the topology of lower level sets only may change when passing a level which corresponds to a stationary point (or Karush-Kuhn­ Tucker point). We study elements of Morse Theory, both in the unconstrained and constrained case. Special attention is paid to the degree of differentiabil­ ity of the functions under consideration. The reader will become motivated to discuss the possible shapes and forms of functions that may possibly arise within a given problem framework. In a separate chapter we show how certain ideas may be carried over to nonsmooth items, such as problems of Chebyshev approximation type. We made this choice in order to show that a good under­ standing of regular smooth problems may lead to a straightforward treatment of "just" continuous problems by means of suitable perturbation techniques, taking a priori nonsmoothness into account. Moreover, we make a focal point analysis in order to emphasize the difference between inner product norms and, for example, the maximum norm. Then, specific tools from algebraic topol­ ogy, in particular homology theory, are treated in some detail. However, this development is carried out only as far as it is needed to understand the relation between critical points of a function on a manifold with structured boundary. Then, we pay attention to three important subjects in nonlinear optimization.