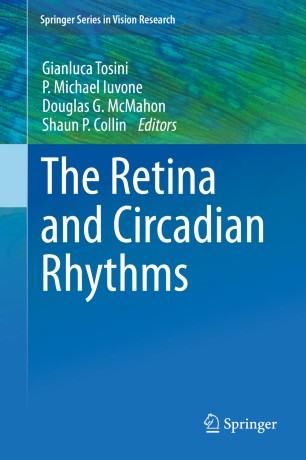 The Retina and Circadian Rhythms

The retina plays a critical role in the organization of the circadian system by synchronizing the brain’s central clock with the external day through transduction of the daily light/dark cycle.  However, the substantial variation in luminance imposed on the retina between day and night also poses a challenge to its role as a sensory tissue – how is it possible to faithfully encode the enormous dynamic range of luminance that can exceed 10 orders of magnitude? The Retina and Circadian Rhythms summarizes the knowledge accumulated over the last 30 years about the organization of the retinal circadian clock in many different species, concentrating on the roles that this circadian system plays in retinal function.

The Springer Series in Vision Research is a comprehensive update and overview of cutting edge vision research, exploring, in depth, current breakthroughs at a conceptual level. It details the whole visual system, from molecular processes to anatomy, physiology and behavior and covers both invertebrate and vertebrate organisms from terrestrial and aquatic habitats. Each book in the Series is aimed at all individuals with interests in vision including advanced graduate students, post-doctoral researchers, established vision scientists and clinical investigators.The series editors are N. Justin Marshall, Queensland Brain Institute, The University of Queensland, Australia and Shaun P. Collin, Neuroecology Group within the School of Animal Biology and the Oceans Institute at the University of Western Australia.

Gianluca Tosini is Professor and Chair of the Department of Pharmacology at Morehouse School of Medicine, Atlanta. P. Michael Iuvone is Professor and Director of Research in the Department of Ophthalmology at Emory University School of Medicine, Atlanta. Douglas G. McMahon is Professor of Biological Sciences and Pharmacology, Associate Director for Education and Training Vanderbilt Brain Institute, and Director of Graduate Studies in Neuroscience at Vanderbilt University, Nashville. Shaun P. Collin is Professor, Deputy Director of the Oceans Institute and Head of the Neuroecology Group at University of Western Australia, Crawley.