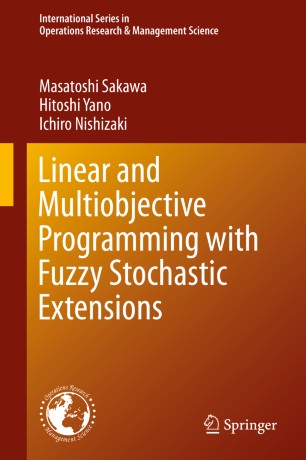 The book is self-contained because of the three appendices and answers to problems. Appendix A contains a brief summary of the topics from linear algebra. Pertinent results from nonlinear programming are summarized in Appendix B. Appendix C is a clear explanation of the Excel Solver, one of the easiest ways to solve optimization problems, through the use of simple examples of linear and nonlinear programming.

Masatoshi Sakawa was born in Matsuyama, Japan, on 11 August l947. He received B.E., M.E., and D.E. degrees in applied mathematics and physics at Kyoto University in 1970, 1972, and 1975, respectively. From 1975 he was with Kobe University where, since 1981, he was an Associate Professor in the Department of Systems Engineering. From l987 to 1990 he was a Professor in the Department of Computer Science at Iwate University. At present he is a Professor at Hiroshima University and is working with the Department of Artiﬁcial Complex Systems Engineering in the Graduate School of Engineering. He was an Honorary Visiting Professor at University of Manchester Institute of Science and Technology (UMIST), Computation Department, sponsored by the Japan Society for the Promotion of Science (JSPS) from March to December 1991. He was also a Visiting Professor at the Kyoto Institute of Economic Research, Kyoto University from April l991 to March l992.

Ichiro Nishizaki received B.E. and M.E. degrees in systems engineering at Kobe University in 1982 and 1984, respectively, and he received the D.E. degree from Hiroshima University in 1993. From 1984 to 1990, he worked for Nippon Steel Corporation. From 1990 to 1993, he was a Research Associate at the Kyoto Institute of Economic Research, Kyoto University. From 1993 to 1996, he was an Associate Professor in the Faculty of Business Administration and Informatics at Setsunan University. From 1997 to 2001, he was an Associate Professor at Hiroshima University, and was working with the Department of Artificial Complex Systems Engineering in the Graduate School of Engineering. At present, he is a Professor in that department. His research and teaching activities are in the area of systems engineering, especially game theory, multiobjective decision making, and fuzzy mathematical programming. He is an author or coauthor of about eighty papers, one book in English (Springer: "Fuzzy and Multiobjective Games for Conflict Resolution"), and two books in Japanese.