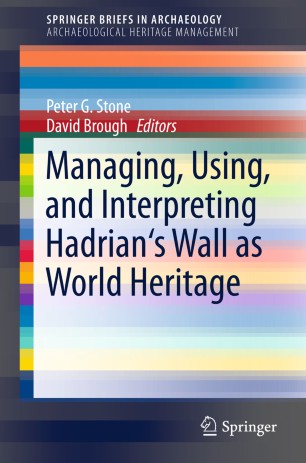 Part of the SpringerBriefs in Archaeology book series (BRIEFSARCHAE, volume 2)

Hadrian’s Wall was inscribed as a World Heritage Site (WHS) in 1987 and, with the German Limes, became one of the first two parts of the transnational ‘Frontiers of the Roman Empire’ (FRE) WHS in 2005. The World Heritage Site of Hadrian's Wall is unusual, although not unique, among World Heritage sites in its scale and linear nature: stretching from Ravenglass on the west coast of England to Newcastle upon Tyne on the east coast - over 150 miles. Along its length it passes through two major urban centres and a variety of rural landscapes and its remains vary from substantial upstanding architectural features to invisible below ground archaeology. Traditionally many of the constituent parts of Hadrian's Wall, forts etc, have been managed as separate entities by different State and private organisations. These and other issues make it an extremely complex WHS to manage. This book not only chronicles the past management of the Wall but also looks towards the future as more countries aspire to have their Roman frontiers added to the FRE. The experience gained over the last two decades illustrates developments in the management of large scale complex heritage sites that will be of value as a detailed case study to those involved in (and affected by) heritage management, as well as academics, and students. Many of the issues raised will find resonance in those faced by many other large (World) heritage sites.